Savage in the cage.

Savage in the bedroom.

Powerful. Brutal. Mixed Martial Artist, Ryland “The Savage” Cole doesn’t play by the rules. He wants it. He takes it. And he wants Jade.

Professional cuddler Jade has not only been hurt but also deceived by the one she once loved. She’s not going to make a mistake again by giving her heart to a man. Especially since she’s now free.

When a motorcycle club threatens her best friend, she puts her life on the line in order to save him, but in order to do that, she must spend every night in Ryland’s arms. 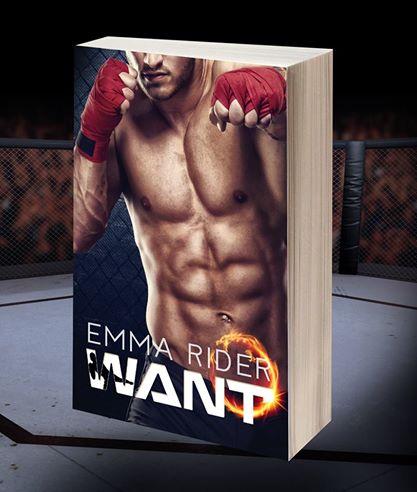 The announcer said, “Your winner tonight by way of TKO is Ryland ‘Savage’ Cooooolllle.”

The crowd cheered, and I whistled and clapped along with them. Then I froze as Ryland’s grays ensnared mine. Something powerful gleamed in them. Something predatory, and I was unable to tear away.

A thought crossed my mind. Should I run because of the way he was looking at me? I’d never had anyone look at me like that before. Not any of the menacing women in the prison who were picking their teeth with bones nor my ex when we were in the peak of our relationship. Ryland’s look was scary but another kind of scary. A pure sexual scary, and I kind of liked it.

My insides quivered, and my body ached for him. Sexual tension was a cunning enemy, always present, and I had ignored it since I’d met Ryland. But at the moment, I felt that I was going to blow if he came near me.

He moved, his body a ripple of power as he stalked toward me, ignoring the crowd seeking his attention. A reporter with a death wish stepped in front of him, cutting off his path.

Ryland halted to shoot the man a glare. The reporter changed his mind fast and scurried out of Ryland’s way. Coach threw his hands in the air, shouting at Ryland to stay, but was ignored. Ben must have had iron balls to put a hand on Ryland’s shoulder, but Ryland shot his grays to him, and Ben lifted his hands and backed off slowly.

My jaw had already dropped but fell even more when Ryland vaulted himself up the cage’s chain link, over the edge, and leaped to the ground, his knees bent to soften the impact. The spell broke when people swarmed him like flies, and I lost sight of him.

Tyeesha gave my hand a quick squeeze, mumbling, “Oh Lord, someone has it baaad.”

Who had it bad? Me or him? Because I freaking had it bad. I needed to get the hell out of here before he caught me. As I decided to run far away, maybe Hawaii or someplace farther, I watched the unfortunate person in front of me get tossed aside, and Ryland’s T-shirt-clad body materialized two inches from my face. I cranked my head back and froze.

The lights flashed behind him, and I blinked quickly. The crowd moved and buzzed around me, but they were merely background noise. His white teeth flashed in a predatory way, his grays were molten, and the way he was staring at me had my body flaring from a single flame to a freaking inferno. Run? What was the definition of that word? Before I knew it, he bent and I landed on his shoulder, my breath escaping me.

We were moving before I realized what was going on. I didn’t struggle, but I did attempt to brace myself on his back so I didn’t just hang there. He carried me out of the arena like he was a victorious warrior claiming the glory, claiming his prize. And I was his prize. 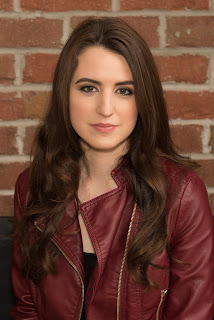 Always your friendly neighborhood cosmic secretary of romance, Emma Rider has been weaving stories since she was about five, writing and acting out plays about princes and princesses for her parents often. She currently resides in the East Coast with her husband and two standard poodles. She loves to read, needs to write, and has a love/hate relationship with cooking—but she can be found doing any of these. If she’s not found doing any of these, don’t worry, she’s probably practicing martial arts, dabbling in graphic design or pestering friends with movie quotes. She loves romance, loves happy endings and especially loves writing them. 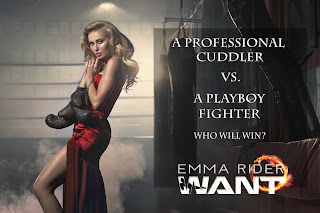