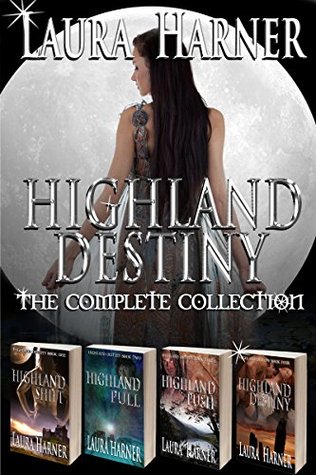 All four books in the Highland Destiny saga are now available for one low price and FREE on Kindle Unlimited. Includes 4 full novels, over 1100 pages.
Enjoy a tale of betrayal, murder, and magick spanning two continents and hundreds of years. It's a race against time to discover the lost secrets of Druidry, as the members of a dark sect, the Bresal Etarlam, work to destroy all that is light, in order to claim the Druid legacy as their own.

Highland Shift - When Elena is betrayed by her ex-fiance and the powerful Worthington family, she ends up in Scotland as part of a settlement. One kidnapping and two attempts on her life later, the darkly arrogant Scot, Faolan MacGailtry declares himself her new protector and moves into her farmhouse. One by one, Elena uncovers Faolan's darkest secrets: his Druid heritage, his connection to her past, and finally, the deadly curse that is powerful enough to destroy them both. "Solid modern fantasy...endearing...well worth exploring." -Publisher's Weekly

Highland Pull - Join Gabhran and Miranda as they are pulled hundreds of years into his past, and only one of them remembers the truth! When realities shift once again and Gav is returned to the present leaving Randi lost in his past, she realizes they are pawns in a much larger game. It's up to her to discover her hidden magick and fight her way back.

Highland Push - Alysone is caught in the modern world, surround by her new friends and family, but mourns the loss of Alexander, whose mission was to remain the past to kill and be killed. Can everything be as it seems, or will Alex join those who've been brought forward in time to battle the dark forces trying to destroy Druidry for all time?

Highland Destiny - Ian Worthington, the ancient warrior displaced by time, knows sacrifices must be made for the good of the order, including his own heart. However, as prophesies are revealed, he discovers sending Andi away for her protection may prove too costly for them all. Despite the harsh treatment she receives from the man who claimed her heart, Andi must uncover the darkest secrets of her Druid heritage and the connection to the past, before the upcoming battle destroys the balance of power forever. All that's at stake is the fate of the world. 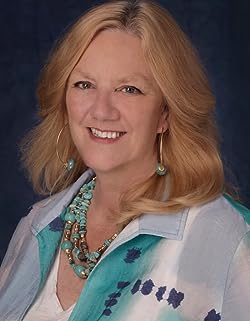 I'm Laura Harner and I write romance.
*Everybody chimes in* Hi Laura!
I live on waterfront property in Arizona because I've always wanted to be an oxymoron. I once enjoyed hobbies such as gardening and travel--now the characters my head compel me to tell their stories, so I write. (It doesn't actually help quiet the voices--but it keeps the folks in the white jackets at bay.)
I love to tell stories of people who find themselves in unusual situations (attracted to a best friend, in a haunted house, kidnapped for his own good, etc.) and then have to find way to push through whatever it is holding them back from finding love. I'm a big believer that love comes in many flavors, so among my titles you'll find MF, MM, and multiple partners of various combinations. In other words, love outside the lines. Suspense included, no extra charge.
My home is filled with an ever-revolving cast of characters--some of whom are actually real--and outside of writing and watching my Diamondbacks baseball, I am building my own version of the Willow Springs Ranch to turn into a writer's retreat.
With over fifty published novels and novellas, I'm rapidly approaching a half million books sold! I want to thank each and every reader who's taken a chance on one of my books--that makes you family.


Connect with me online: