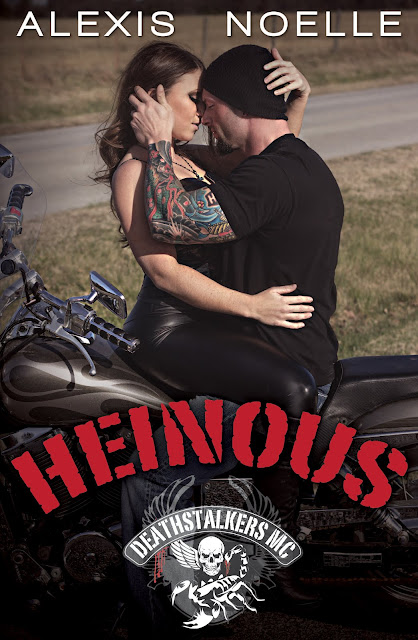 I was never meant to have a happily ever after.
It was a fate I accepted a long time ago.
Before he came for me, taking away who I am, I needed to escape.
Just for one night.
One man turned my entire world upside down.
I should have walked away, but something about him wouldn’t let me.
Now I’m lying to him.
He’s going to find out the truth, or my life will catch up to me.
Either way, I lose him.
It’s a thought I can’t bear.
People have always told me love is amazing and powerful.
They’re wrong.
It makes you weak…exposing your vulnerabilities…making you easy prey.
Love is heinous.

Although Heinous is the second book in the Death Stalkers MC series, reading book 1 isn't necessary to follow Twisted and Nikki's story.
But if you love an awesome MC series, do yourself and grab a copy of book 1, you won't be disappointed.

After reading the first book in the series, Corrupted, I was super excited for Twisted's story. His character intrigued me most out of all the brothers in the Death Stalkers club house.

Twisted is the VP of the Death Stalkers MC. He's fiercely loyal to his brothers and club, and would do whatever was needed of him to keep his family safe.  He's like Fort Knox when it comes to his past, a past that haunts him unless he keeps it tightly under lock and key and impenetrable walls!!
He never sleeps with the same girl twice - referring himself to Baskin Robbins, wanting thirty-one flavours on a daily basis.
That comes to a complete halt when he meets Nikki!!!

Nikki is trying to escape from her life, trying to live every possible moment with her freedom in tact, till herdeadline is up.
She's beautiful.
Sassy.
Independent.
She has a smart mouth, with literally a come back for everything thrown at her.  She hides behind walls and secrets even thicker then Twisteds.
She also has an intense dislike of bikers and MC's.
But that all changes when she meets Twisted!!!

Twisted and Nikki come together in an instant blaze of lust that leaves them both reeling from the experience.
Nikki wants to run as fast as she can but Twisted wants to hold on to Nikki with both hands, which in the end Nikki allows for purely selfish reasons on her part.
The chemistry between them is hot and explosive which leads to steamy scenes between the two of them!!!

The question is when all their secrets are out in the open and Nikki needs Twisted most will he rise to the occasion and come in all guns blazing to her rescue or will he just slink away??
The subject matter in this book is a bit dark for me, as I'm not a big fan of dark reads. Having said that, it had its purpose in the plot, and wasn't there for the sake of it.
Heinous gripped me from the first page to the very last and I literally read it in one sitting. I loved the banter between Nikki and Twisted - the serious, the playful and even at times humorous. Its like they bring out sides to one another that are completely invisible to others but them!!!

Can't wait for the next book and Torch's story!!

Posted by Anonymous at 9:30 pm