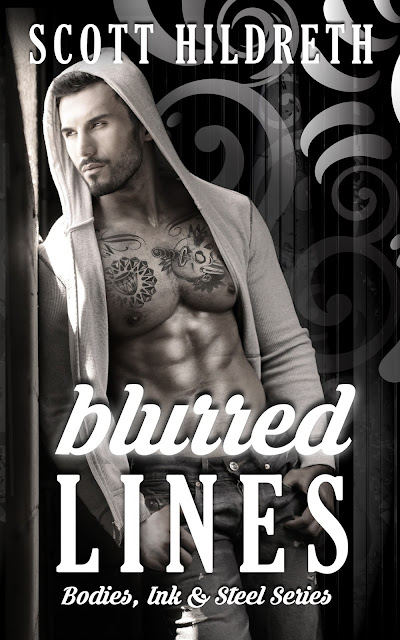 SynopsisBlake West is the mysterious owner of Blurred Lines, a tattoo parlor that not only has provided him with a steady income, but has also supplied a steady stream of women into his life. Now, however, things for him are much different.

Riley Campbell just ended a relationship with an abusive man who enjoyed controlling her every move. Now free of his grasp, she feels the need for a celebratory tattoo, her first of what she expects to be many. Her expectations of the parlor, the artist, and the process were pretty weak when she walked in.

And then she meets Blake West.

Covered in tattoos, handsome, mysterious, and muscular, Blake West is not at all what Riley expected to find, but exactly what she feels she needs.

Blake is a sex addict. 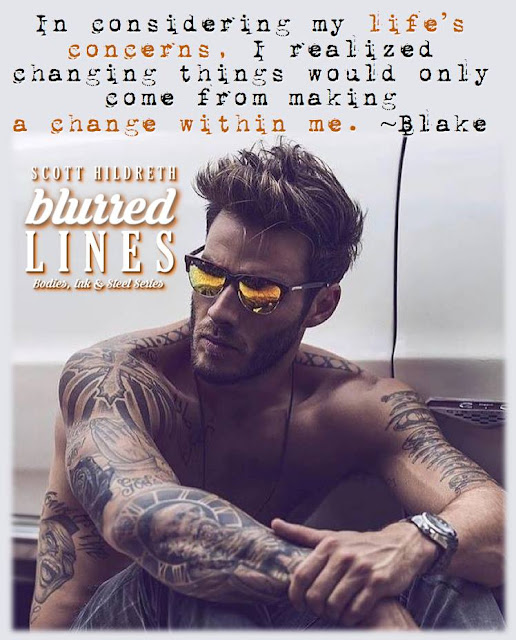 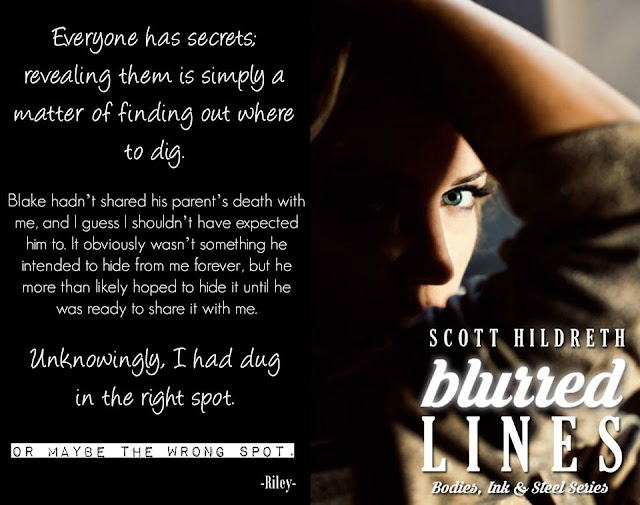 Dying wasn’t anything I was afraid of, in fact, my life had
been lived in quite the opposite manner. For as long as I could remember,
living was my biggest fear. Living in a world where I was not only allowed -
but required - to a make decisions that would affect me for a lifetime scared
the absolute shit out of me. My greatest fears were regarding my inability to
make good decisions always seemed to be related to men or relationships.

Maybe it was that I was all too eager to have what I was
surrounded by - women in seemingly healthy relationships.

The thought was laughable.

I caught the first glimpse of him as he walked out of the
bedroom. As I stirred my much needed coffee and peered toward him, he sauntered
into the living room like he didn’t have a worry in the world. Hell, maybe he
didn’t as far as he was concerned.

“Where’s your shirt?” I hollered.

His body swiveled toward my voice. Upon recognizing me, his
eyes went wide. “I didn’t know where you went.”

I glanced down at his bare feet, chuckled, and shifted my
eyes upward. “Well, now you know. Where’s your fucking boots?”

He tossed his head to the side. “There in your room.”

He had the body of a Greek God. Muscles on top of muscles,
no body fat, a ripped mid-section, and a prominent “V” at his waist – the “Fuck
me V” I preferred men to have. Well, to be honest, I required it. He described
himself in the bar as being hung like a horse, and he didn’t lie in that
regard.

He had no sexual stamina.

I took a sip of coffee and shrugged my shoulders. “Well?”

“Well what?” he asked as he continued to walk in my
direction.

“Well, you aren’t going to want to ride home like that,” I
said as I nodded my head toward him. “Go get ‘em.”

“I ain’t plannin’ on leaving just yet. Thought we could go
at it again,” he said with a laugh.

I nodded my head and widened my eyes comically, like he’d
revealed one of the greatest ideas I had heard in the last decade. Although I
hadn’t originally intended to do so, as I lowered my coffee cup, I burst into
laughter.

“What?” he shrugged as he stepped into the threshold of the
doorway.

I suppose most women would have at least got a little more
dick from the guy. Hell, it wouldn’t have cost me anything.

Well, nothing but a little pride.

“Listen. Go grab your shit and hop on that HOG of yours and
go on home,” I said as I turned toward the sink.

“Something wrong?” he asked as he walked into the kitchen.

I placed my cup on the counter and turned to face him. “Other
than the fact you’re in my kitchen?
No. Listen, just go.”

And it was then that he grabbed my shoulder. And it wasn’t
the kind of grab that a girl likes. Not the one that makes her go weak in the
knees or feel butterflies. Hell, it wasn’t even the one where a guy forces his
woman to commit the act.

The way he grabbed me reminded me of my ex.
The “I’m getting what I came here for, regardless of what
you just said” grab.

I spun to the side, pulled open the kitchen cabinet, grabbed
my newly purchased .45 caliber Colt pistol and leveled it at his head.

“See, you could have
left. You really could have,” I said as he began to walk backward.

“’What the fuck’ is right. What the fuck did you grab me
for? Huh?” I asked as I continued to force him closer to the door.

“Shut up. Now you get to ride home barefoot. Get the fuck
out,” I fumed as I tilted my head toward the door.

“You’re all fucked up on where you are,” I said. “I make the
rules in this house. You really need
to go.”

“I can’t ride without my boots,” he shrugged as he continued
to nervously eye the barrel of the pistol.

“You’d be surprised.
Get out,” I demanded. “And I’ll leave whatever you’ve left here at the door of
the bar where we met last night on my way to work.”

“Bitch? Yeah. I am,” I said with a grin as he stumbled into
the door.

“Now reach around and open it. It’s unlocked,” I said as I
nodded my head toward the door.

“Yeah, really,” I said as I reached past him with my free
hand and opened the door.

“Crazy bitch,” he said over his shoulder as he walked to his
Harley.

“You fuck like a girl,” I said as I slammed the door.

I set the pistol on the counter as I walked into the kitchen.
After warming my cold coffee in the microwave I made some toast, sat down, and
began to eat my light breakfast. Half a dozen beers, a few margaritas, and who
knows what afterward had led to a night that was a blur of a memory at best, and
now my stomach was in turmoil; anything more than toast and I’d yack for sure.

And I hated barfing just about as much as I hated men with
no stamina.

As the sound of his Harley faded into the distance, it was
almost as if a small part of my confidence went with him. A girl with my looks,
body, sexual appetite, and my attitude should be able to find a man compatible
with her.

But try as I might, I seemed to always choose losers.

I had decided after leaving Bart that the next man I settled
down with was going to treat me right, fuck me right, and be able to stand on
his own two feet without my income as a crutch.

And I really didn’t care how many men I had to force out of
my house at gunpoint to find him. 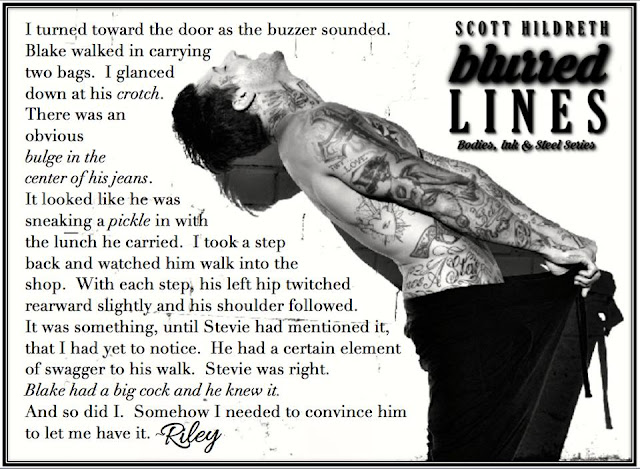 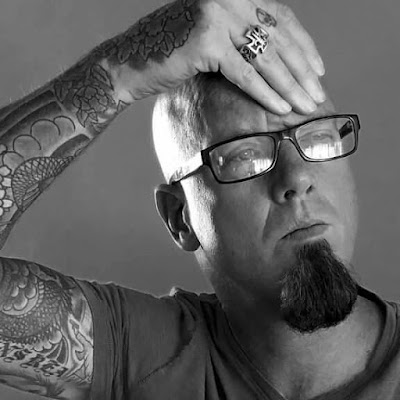 Born in San Diego California, Scott now calls Wichita, Kansas home. Residing in Kansas with his wife, Jessica, and five children (and another on the way in November 2015), he somehow finds twelve hours a day to work on his writing.

Addicted to riding his Harley-Davidson, tattoos, and drinking coffee, Scott can generally be found in a tattoo shop, on his Harley, or in a local coffee house when not writing.

Loyal to the fans, fan girls, and faithful followers who allowed him to make writing a full-time career, Scott communicates with his followers on Facebook almost daily. He encourages his readers to follow him on Facebook and Twitter. 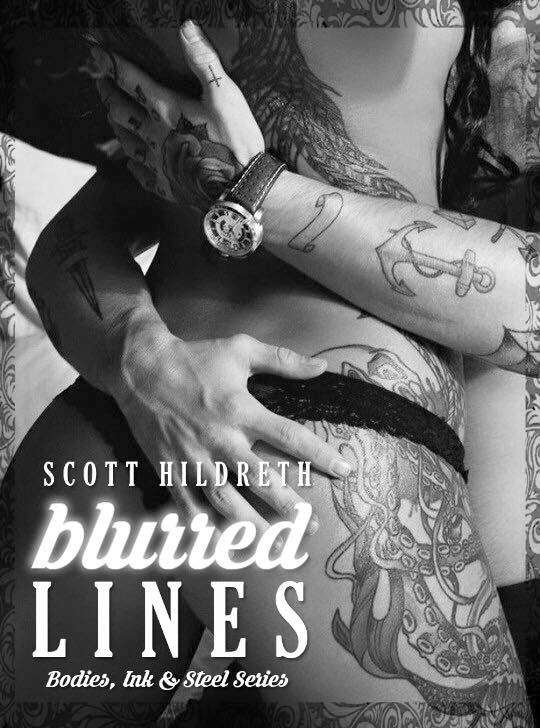